Let's be honest: checking our phones for new information is the first thing we do when we wake up in the morning, and the last thing we do before going to sleep at night.

That's probably not true for everyone. But it can definitely feel true. Even if you're not someone who checks your phone every five minutes, it's likely the case that you still receive a steady stream of information throughout the day: from news apps, from social media, or from other forms of messaging.

Ever wonder if that steady stream of stuff affects our ability to understand it all?

Short answer: Yes. Yes, it does.

With so much information being poured into our brains every day, it can be easy to lose sight of a couple important elements that are key to understanding: Context and Purpose.

The most direct definition of context is: the circumstances that surrounds a situation, idea, or fact.

Everything that's written or spoken exists inside a certain set of circumstances. Someone is influenced by a set of factors, and presto! They create a piece of information that is the result of those circumstances.

Let's say you receive this text from a friend: 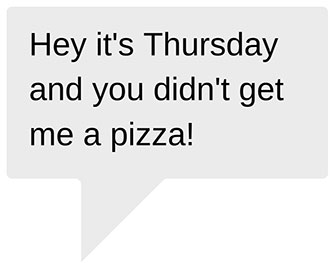 Without any context, this text could leave you scratching your head in confusion. It won't make much sense—until you know the context. To find the context, we'd need to fill in some blanks: what if the text was written by your friend Keith and sent to you late Thursday afternoon? And what if a little investigating reveals that someone has been having a pizza delivered to Keith's house every Thursday at noon for the last three months as a prank, and Keith thought it was you?

Now the text makes some sense, once it's placed in its context.

Or consider this news headline: 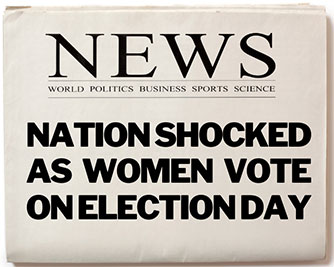 This would be a very strange headline to read today, of course. But it might make a little more sense if we know its historical context: 1920, the year after the 19th amendment provided women with the right to vote. While we understand that gender-based voter discrimination is wrong, voting equality was a controversial new idea back then, when women voting in elections for the first time would be considered newsworthy.

Context can help us understand any information better: news stories, historical events… or texts about free pizza. To discover the context surrounding an information source, we can ask some key questions:

Creator: Who wrote or spoke it?
Setting: Where and when did it take place?
Audience: Who was the information created for?
Purpose: What was the creator's goal in presenting the information the way he or she did?

That last one, purpose, deserves some more attention.

One of the most significant elements of context that can help us look at information more objectively is purpose: what it is that the information creator wants to accomplish.

According to experts, most published information is created to meet one of six purposes. (Spoiler alert: sometimes the purpose information seems to be fulfilling is actually just a disguise for a different one.)

2. To Sell
The purpose of advertisements is to sell us products or services. This may seem obvious, but some forms of advertising can be clever about masking their purpose (ads disguised as "news" articles, for example).

3. To Persuade
Editorials, commentaries, and other forms of argument want to do more than just provide information; their goal is persuade us to see something a certain way. Whether using factual evidence (a Letter to the Editor) or humor (a late night TV host's opening monologue), the purpose is to make our perspective align with theirs.

5. To Provoke
Information created to provoke is often called propaganda; an example might be an image or slogan written to promote a political point of view, and provoke a strong response from others. Propaganda isn't necessarily bad or dangerous—but its purpose is to provoke action, for better or for worse.

6. To Document
Information with this purpose can be considered the most "unfiltered" type: it doesn't include any opinion or point of view. Think about raw security camera footage, statistical data, and other forms of record keeping.

Look at this historic example of a poster published in the 1940s. It's easy to identify the ominous tone, but see what happens when we take a closer look at its context and purpose.

Creator: Who made this? 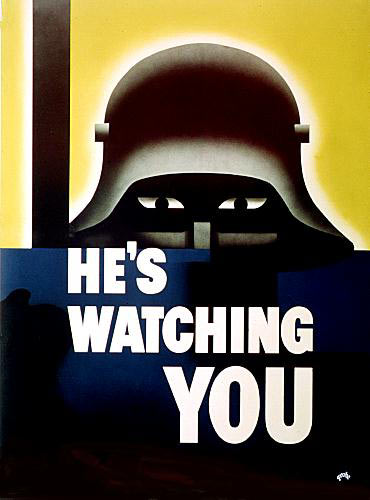 An artist named Glenn Ernest Grohe, who was asked to create this poster by the U.S. government, Office of War Information.

Setting: When and Where?
The poster was created in the U.S., in the early 1940s, right in the middle of World War II. This was a time when the government was concerned about top secret military information falling into the hands of Germany.

Audience: Who was this for?
This poster was meant for Americans who were susceptible to the fear of being watched by enemies. This audience likely saw the shadowy, helmeted figure whose eyes stared right at them, and became even more afraid of their words and actions reaching the enemy.

Purpose: What was the goal?
The poster was not intended to merely provide information, sell a product, or entertain. And it wasn't meant to present evidence that argued a point of view, or simply document an event. The purpose was to provoke an emotional response, and a subsequent action. There may not have been proof that Americans across the country were being spied on by German agents, but this propaganda attempted to make Americans feel that way—and ultimately govern themselves extra carefully around their friends and neighbors.

A brief round of subject database research (starting with the World War II section of ABC-CLIO's American History database) can reveal everything we just discovered about this poster, and help us see it more clearly.