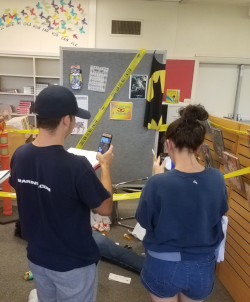 Who doesn't love a good crime scene? Students talk of going into forensics. They even know what an entomologist is. Interactive crime scene activities are becoming part of our culture.

Why Incorporate a Crime Scene in Library Programming?

Students come to us with a sense of wonder. A dead body on the floor will definitely generate interest. The number one way to quickly solve a crime is also the foundation of research: asking questions. All good research starts with asking questions. A crime scene is no different. You must notice what is there and create questions based on what you see and don't see. (Yes, it does sound a bit like close reading, another bonus.)

Click to Enlarge +Everything in the crime scene is evidence. Everything proves something.

How Do You Get Started?

Start with a team with which you have a connection. Ask what they are working on. This will serve as the basis of your backstory. You can also reach out to multiple groups and create a cross-curricular crime scene. I reached out to a team planning a hero unit, including elements of a hero of today. So, I made a leap to superheroes. I know my student body is very interested in superheroes and has clear opinions on Marvel vs. D.C.

Additionally, I wanted to include a public service announcement (PSA) component. My site was starting to have vaping issues and students were asking several questions of the safety of vapes.

Armed with a theme and PSA focus, I began research to create clues about what might have happened to our victim.

How Do You Prepare?

Decide on the location of the crime. Then decide how much of that location you will re-create. For example, if the crime takes place in the kitchen, maybe only one third of the kitchen is needed.

All crimes have a suspect list. Once above is determined, create a suspect list of five to ten people. This is a great opportunity to pull in colleagues. I sent out the following email to ask for volunteers:

I am working on a crime scene for an upcoming 9th grade unit.

If you would like to be a suspect, please let me know. You will have a real picture but a fake name, backstory, alibi, and motive. I will let you see your suspect profile for approval prior to sharing with students.

This email helped me get my suspects. I used everyone who volunteered. Extra bonus: This served as an opportunity for me to advocate and show the crazy fun stuff I can do for them.

If you are unable to get a picture, the website This Person Does Not Exist is a good source for synthetic, yet realistic photos generated by artificial intelligence (https://thispersondoesnotexist.com/).

Let students help, but not too much. After all, they can't know what really happened. One student created art, I really needed Loki's zombie goat; another wrote a letter; another created witness statements. All of them were excited to help.

Duplicate evidence was created to reward astute detectives who could not see fine details behind the crime scene line. In this case, that was a letter crumpled up by the chair and a receipt on the table. Items were in a sealed evidence bag. Of course, chain of custody was maintained. I permitted students to take pictures of the crime scene; however, they were not allowed to take pictures of special evidence.

Timing is based on 45-minute classes.

Days One and Two: Record all physical evidence and make inferences based on evidence. Create a form that will work with your team's goals.

Day Three: Generate questions to investigate based on evidence.

Make sure to invite your admin. I also invited them to solve the mystery.

Seeing students get excited about research was the biggest win. Crime scenes will forever be part of my programming. My kiddos were excited to be right. They took the stance they had to convince me their solution was correct. In the end, I opted not to tell them what really happened, but selected "winners" who best crafted what happened based on physical evidence and inference. Perhaps next crime scene I will tell them my solution, perhaps not.

Katie McNamara, MA, is a school librarian at North High School in Bakersfield, CA, and an adjunct professor for Fresno Pacific University. She earned her media specialist credential from Fresno Pacific University. McNamara is a co-author of Makers in Schools: Entering the Fourth Industrial Revolution (EduMatch 2018). She is a Google Innovator, AR/VR enthusiast, Mackin Transform Your School Library advocate, Ed Change Global organizer, Global Maker Day organizer, and co-founder of #calibchat. Follow her on Twitter @KatieJMcNamara or connect on Voxer: KatieJMcNamara.