Author: Brian Bossak, associate professor of public health
Description: This reference article examines how the Black Death spread and how it affected Europe's population and society.

Geography and the Black Death 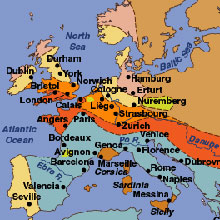 Exactly where the medieval disease that we call the "Black Death" started, no one knows for sure. However, historical accounts suggest that the disease likely began in ancient civilizations of central-eastern Asia, and spread westward during the 1340s, eventually entering Europe in late 1346. Within five years, by the time the first wave of the disease had passed through Western Europe, it is estimated that as much as 60% of Europe's population had died.

Origin and Spread of the Black Death

After the development of the Silk Road trading route, Italian merchants (particularly those from Genoa) and other traders established a fortress and market area on the Crimean Peninsula bordering the Black Sea. The settlement was called Caffa. Caffa, and other trading settlements along the Black Sea, were located at the intersection of eastern and western civilizations. For many years, both civilizations participated in trading and merchant activities. However, in 1346, the Golden Horde of the Mongol Empire, under the leadership of Janibeg, attacked the fortress at Caffa again after several previous attempts to take control of the trading outpost. Around the same time, Janibeg's troops began to fall ill and die of the disease that would later be termed "the Black Death." In a desperate move, as his army began to collapse from illness, Janibeg ordered that bodies of those who had died from the disease be catapulted over the fortress walls and into the center of Caffa. Whatever the disease was that had inflicted so much death and suffering on the attacking Mongols, it terrified the Genoese traders so much that they abandoned Caffa and quickly boarded ships to sail home to Italy.

Unfortunately for the Italian merchants who abandoned Caffa and sailed for Italy, the Black Death sailed with them. Ships arriving from the Black Sea anchored at Messina and other cities in Sicily where the first accounts of the Black Death in Europe were recorded. Soon after these ships arrived in late 1346, the disease began to infect populations in continental Europe. By 1347, the Black Death was firmly entrenched on the continent and moving north through Italy and Spain into southern France. It would sweep through Europe like wildfire, killing untold numbers of people, leaving some towns and cities abandoned, even killing livestock and animals. The primary wave of disease swept north, through Scandinavia. Historical documents record the last location of a disease with symptoms similar to those of the Black Death in northern Russia in 1353.

Impact of the Black Death

As it moved from Italy north through Europe, the disease was not referred to as the Black Death, but rather "the Great Pestilence" or alternatively, "the Great Mortality." As the disease infected susceptible populations and then moved on to new regions in Europe, the mood of the people soured. Depression and a feeling of the "end of the world" permeated the lives of those who survived the disease. The Flagellants, a splinter group of the Catholic Church, moved through various cities and towns in Europe, publicly whipping and mutilating themselves, in order to alleviate the epidemic, which they believed was a punishment from God. In some towns, Jews were blamed for causing the disease and burned at the stake. The networks and trading connections that began to flourish in the 12th and 13th centuries withered as xenophobia—the fear and hatred of foreigners—spread. In later centuries, the terminology for the disease changed to what we use now to describe both the disease itself and the perception of the population living through this time—the time of "the Black Death."

In the wake of the Black Death, survivors were left with societies that had lost as much as 80% of the local population to the disease. The power of the Catholic Church had peaked just before the disease erupted; the massive death toll from the epidemic led some to conclude that calls for divine protection and healing for the sick had gone unanswered, and secularism or the rejection of religion began to rise, culminating in the dawn of the Renaissance. The Black Death strongly influenced the end of the medieval period and launched a new perception of the world, including expanding geographic boundaries, a reestablishment of long-distance trading networks, and a rebirth of scientific inquiry that had been largely absent since Roman times. Within 150 years of the end of the Black Death, Christopher Columbus would bring news of the New World to Spain, and the spatial concept of the world would never again be the same.

Brian Bossak is an associate professor of health and human performance at the College of Charleston. He received his BS and MA degrees in geography from the University of Georgia, a PhD in geography from Florida State University, and an MPH in Environmental and Occupational Health from Emory University. He served first as an assistant professor of geography and later as an assistant professor of environmental health sciences at the Jiann-Ping Hsu College of Public Health at Georgia Southern University in Statesboro, Georgia, and previously worked as a contractor at the Centers for Disease Control and Prevention (CDC). He served as chair and vice-chair of the Health and Medical Geography Specialty Group of the Association of American Geographers. He is coauthor of a book chapter entitled "Spatio-temporal characteristics of the medieval Black Death" in Spatial Analysis in Health Geography (Ashgate, 2015) and several journal articles on the Black Death (Medical Hypotheses, 2009; PLOS ONE, 2009; Geography Compass, 2010).